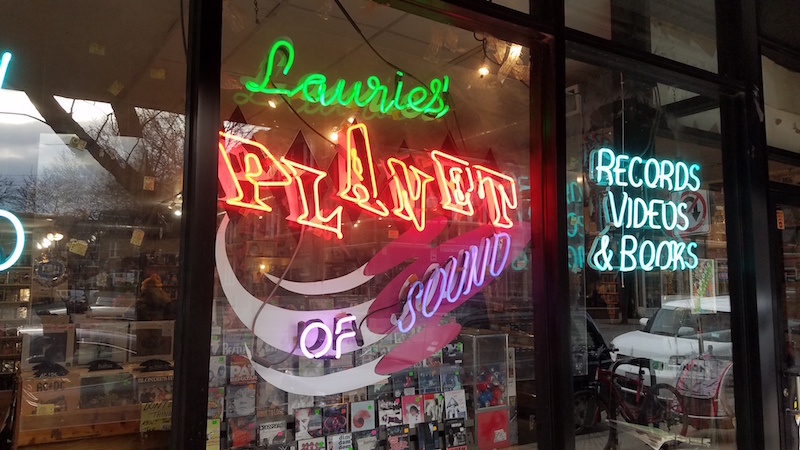 I am lucky enough to have a neighborhood record store, Laurie’s Planet Of Sound. In Chicago, there are lots of neighborhoods with at least one shop nearby, but even after more than a decade in Chicago I am still feeling very spoiled by this.

So naturally when I decided to start doing vinyl-based sound art, Laurie’s became a go-to place for me. I like the people who work there, it’s a shop with a lot of character, and I always find unusual vinyl records there. Mostly though, I go in, do my own research, and take what I can find.

“I’m looking for a really crappy copy of The Joshua Tree.” Yes, THAT Joshua Tree, the 1987 release by U2 produced by Brian Eno and Daniel Lanois, recorded by Flood, and album photography by the legendary Anton Corbijn.

Which got laughs, questions about why I needed a crap copy of an RIAA Diamond-selling record (the highest record sales award you can get..Gold, Platinum, Diamond, lots of money). I explained to them what I’m about to explain to YOU, except this is not the condensed version.

Earlier in the day, I spent some time in an isolation tank, floating in pitch blackness, having some zen experiences, contemplating the void, getting salt water in my eyes, and hearing my own blood rushing through my ears with a bit of tinnitus thrown in for good measure. OK, more than a bit.

I got out, showered, and went home to do some research and try to get some inspiration for a new sound art project to work on. I sat down at the computer and started thinking about that isolation tank. About how black it was. As black as the dead wax on a vinyl record, except not as reflective. As in, not reflective at all.

Thinking about dead wax and vinyl records and sound art all together started making me contemplate Negativland for some reason. I have no idea why the name popped in there except that in relation to sound art, they have always been front and center in my mind as a group of people working on things that obsessed them even when it had the potential (fully realized) to get them into big trouble with corporate media.

That controversy happened when Negativland released some material featuring appropriated sounds from DJ Casey Kasem and U2’s “I Still Haven’t Found What I’m Looking For” from the Joshua Tree record. This is all documented by Negativland in Fair Use and is generally fascinating.

Then I started thinking about how one could revisit this controversy, paying tribute to Negativland’s work with one hand and poking the goofy lumbering corporate media they had to battle with the other. But, it must be stressed, without reinventing Negativland’s wheel or breaking into their wheelhouse, so to speak.

So I decided to make a little pilgrimage to Laurie’s Planet of Sound to see if I could first find some source material-preferably The Joshua Tree-and go from there.

My goal was to find a beaten-to-death copy of The Joshua Tree, one with a lot of surface noise, skips, and age-related wear of the worst kind. Something that looks like the dog took it out to the back yard and buried it. And then dug it up again and took it surfing.

But Laurie’s likes to stock records that do NOT resemble this, so I was out of luck-even after squatting down and dealing with the knee-destroying Fifty Cent Bins. As in, records for sale at the incredibly high price of fifty cents, not bins crammed full of recordings by Fifty Cent.

You read that correctly. This sound art project investigates the intersection of copyright, physical media, the ephemeral nature of that media, musical history, and appropriation.

Which is why this project, Dead Wax and The Sounds Of Silence, uses samples from the album’s runout grooves, the spaces between songs, even silences found within the album itself. These are recorded, edited, manipulated, mutilated, and otherwise altered to create a new, transformative work.

I suppose it’s fair to say that this project also riffs on John Cage’s 4’33, which I include below at the end of the post (while this clip lasts, it may be yanked at any time from the poster’s account via the whims of YouTube) for reference.

This project is ongoing, I was just pretty eager to share all this before memories get too blurry about what happened on the day of the record store trip.

What ultimately happened at Laurie’s? I had to settle for a copy of the U2 vinyl record, Wide Awake In America, which features Lanois/Eno. Sure, it would be more historically accurate and fun to manipulate the silences of The Joshua Tree in general, and “I Still Haven’t Found What I’m Looking For” in particular. But for now, source material has been obtained, and the manipulation begins in 3…2…1.